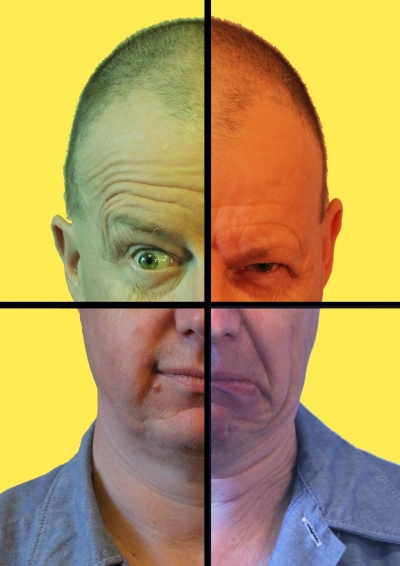 Altered Minds, Altered Realities is a raw and courageous presentation of Mental Illness. Augustus Stephens has created 6 vignettes of different people living with different conditions in a brutally honest, lyrical and thoroughly entertaining way. Although the matter is becoming increasingly less opaque, the fact is that most of us –including myself – hold unfair misconceptions about those suffering from the various conditions in the play. Altered Minds, Altered realities has succeed in presenting these illness in a brutally honest way, that invokes our understanding rather than our sympathy,

As we entered the space we met Augustus as himself, already waiting to begin, with nothing but a guitar, some chairs and miscellaneous props. He had a quick informal chat directly with audience, before leaving the stage and re-entering ‘as somebody else’. The first character we meet is Chris, who is schizophrenic. This illness, we learn, is simply the hearing of voices. Augustus’ writing isn’t afraid to give us the unsavoury details of the side effects caused by the medication used to keep the ‘bad voices’ at bay.

We then meet Aled, who has been invited to talk to a crowd about his anxiety. His story of his illness being triggered by working in a call centre – by being trapped by the never ending task of answering a ringing phone – was one of the highlights of the show. The brutal honesty and lyrical use of words during this speech totally absorbed me into Aled’s story.  The play goes on to introduce us to the various other characters living with illnesses such as Bi-Polar and Borderline Personality Disorder. Each new character had their own nuances and every scene was told from a slightly different perspective. The various writing styles that Augustus employed for the vignettes meant that our attention was held throughout, and every new character was as fresh, funny and heart-breakingly honest as the last one. His song ‘You Took the Hole in My Heart’ was simply stunning. With lyrics that could rival Morrissey or Ian Curtis, the song took us through Gus’ explosive mental breakdown, so powerful in its lack of melodramatics.

The direction was excellent. It steered the show away from the traps that most one-man shows fall into. The space was used to its maximum potential, with a beautiful contrast being had between the moments of chaotic movement and pockets of complete stillness. The bold, and incredibly effective choice to have the entirety of depressed Doug’s monologue to be told using voice- over really highlighted the loneliness of the illness.

This performance was the bravest I have seen during the fringe. Augustus’ openness on stage, and his willingness to show some of the really ugly sides of these illnesses was truly astonishing. The message of the show was clear – these six characters are just people. The biggest problem with their illness is the lack of understanding that surrounds them, from the general public, their friends and family, or their doctors.

The care that had been taken to ensure that the writing was never preachy, heavy-handed or self-indulgent was very clear. I wish Augustus the best of luck on his mission to educate people further on mental health. And with the incredibly well written songs and monologues in this play, I have no doubt that he will succeed.