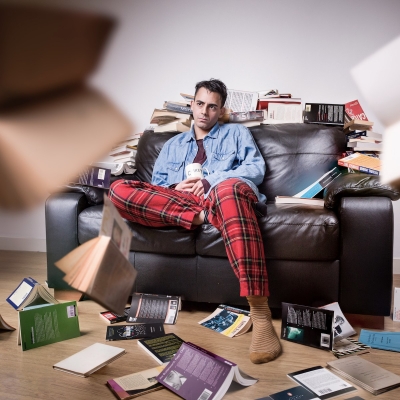 What happens when you give an actor a bottle of whisky, a tray of cookies and a stage for an hour?
That is the question you imagine Christopher Walthorne asked himself before writing ‘Secondhand Stories’, a one man show for Mitch Howell, a professional actor who has become so disillusioned with the path he has chosen that he has no problem yelling out ‘How many times do YOU wank a day?’  to his audience. The result is something akin to what you might imagine Withnail writing for himself after smoking a couple of Camberwell carrots.
‘Secondhand Stories’ weaves reality and fiction together in a half interactive, half autobiographical journey into the life and mind of its lead character. Anything he shares he invites the audience to share too. From coming out stories to audition speeches, you are as much the performer as he is. Even when Mitch opens up about the death of a loved one he doesn’t let it sit with you, he waits until someone is willing to share an experience of losing  their loved one.
The danger of interactive shows is that they’re unpredictable. You don’t know what people will say, or worse, you might be forced to deal  with a crowd where nobody wants to say anything, (a much more likely scenario with a British audience) but luckily for Mitch he had a crowd that were up for sharing and some rather beautiful moments ensued, but telling you more would be spoiling the fun.
My favourite line in the piece  also sums it up  perfectly: “If you think I’m going to have some revelation where I forgive myself and learn how to move on well this ain’t that kind of show.” And if you’re looking for an upbeat tale of an actor trying to make it in the big city this isn’t the show for you. But if you want to experience what it’s like to have all hope ripped out of your arse and still find a way to laugh then buy a ticket.